Again this Friday was going to be a nice day, NO rain…so UN-dutch.  Around 7 Megan started stirring herself and took her shower.  I did turned the Kabola on, but it was not starting.  Jumped in the engine room and let the air out of the diesel fuel line and it started up.  We will see if it keeps acting up.   We had to be up early to catch the Zaan Ferry which leaves every 2 hours, and takes a 45 minute ferry ride to the Central Station in Amsterdam.

Enjoying coffee and the view on the way to Amsterdam. 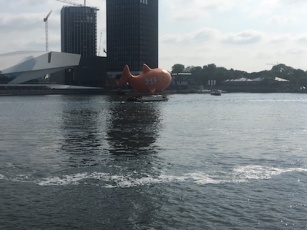 Arrived at Central Station Amsterdam and bikes everywhere.  Then the tram to the Albert Cuyp Straat, the longest year round open market. I also bought 2 more tubes of Gin Mayonaise !!

Took the tram to the Rijks Museum and as usual there were a few street musicians playing classical music.  Walked to the Van Gogh Museum and found out that tickets are only available on line or at the vending machine.  the next available slot was a few hours away, so the girls opted for the next day.

Since they still wanted to see the Anne Frank house, we walked to buss 354. and waited and waited and the bus was showing to arrive the next minute.  Some people were asking what was going on and then we saw the flash message ..some busses and trams were rerouted because of an accident……..that reminded me of last week when  Deb and her 2 friends went to the Anne Frank and Van Gogh went and arriving at the Central Station they found out there was a fire ( which later was a truck driving into the building of a national newspaper ) and thus NO trams or Busses driving.  Peggy decided not to wait and opted to venture out on herself.  SO after a discussion with Megan we decided to take the tram towards the Central station and from one point take another line to the Anne Frank House.  The App 9292 seemed a bit delayed when these emergencies occur.   At the Leidse Plein we opted to walk the rest to the Wester kerk.  By that time we needed a drink and some food….but Megan did not opted for her favorite place..FeBo

The Dam square beckoned us, and it was on the way to the red light district.

While on the ferry another passenger told us that today they were celebrating the birthday of the Dali Lama on the Dam we saw some of the set up.  Naturally there was some kind of protest going on, some street performers . like this one making a bubble show.

Strolled the red light district, and Megan saw all the variety which was presented during lunch hour.  Then the Kalverstraat, the busiest shopping street in Amsterdam, and a few McDonalds, but the menu is quite different.  Maddie and Kathlyn Ly would be in . heaven…NO not because of the burgers, BUT because McDonalds is selling French Macaroons !!!

A busy street like the Kalverstraat does have its hidden treasures, like the Begijn hof.  An oasis of peace and quite space.  Hee the old nuns and widowed affluent ladies spend their last years. 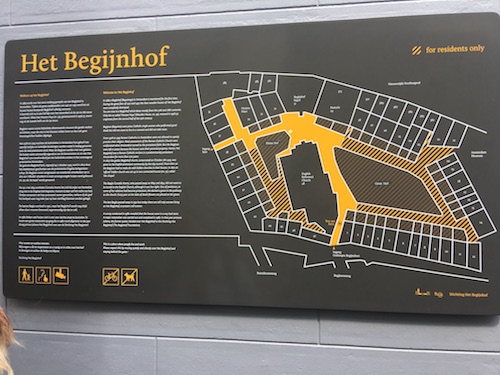 Delft also has a few of these hofjes.  After that the train, and again uploading the transport card with more Euro’s and a Nap

One thought on “Albert Cuyp and Van Gogh”