No not DEMONS..daemons………are small processes running in the background of a computer, doing all kind of tasks, like the teenager mowing the grass, the mailman delivering your mail.  Well there are some of these running around in the Venus.  They keep an eye out many things, especially the digital inputs.  One of the nice items built into the Venus.  The Venus has 5 of these inputs, which can be used for a bunch of tasks.  The first ones which come to mind are bilge alarm (Ok/Alarm),  smoke alarm (Ok/Alarm),  fire alarm(Ok/Alarm), door alarm (Open/Closed), Pulse Meter (water volume pumped), generator (Running/Stopped), etc.   And these ‘states’ are all visible on the screen.

The good thing about the Venus, just these 5 digital input alerts wil pay for the unit by itself, if you compare them to other boat monitoring systems, who have the ‘get rich scheme’ of charging monthly fees.

Now how do we get these to work?
We need to get the different signals to the Venus input, which is a RJ12 input, which is also used in multi line phone system, and had 6 wires.  OHH you said 5 inputs, why 6 wires.  Well wire #5 is Ground.   (we will come to the why later)

The first thing we need to do is get access to these wires.  Now the McGiver way is to get a RJ12 .phone cord, grab a big hunting knife and strip all the wires.  A more ‘civilized’ way is to order a RJ12 Breakout board .  ($5.99 to $12 on Amazon and Ebay)

With this setup we can already trigger alerts.

The pin out is

So lets configure Pin 6 as High water alert and connect a float switch.  The float switch just makes a contact, thus to simulate that we just use a wire and connect pin 5 and 6 on and off and see the results.

These alerts can be triggered by just connecting the input to the ground.  BUT not all alerts can be done that way !!  Now Venus is kind of sensitive about the voltage it wil take. Yes I know the power input can be 8-70VDC, but that regulates it down to 5V and 3V3, the two voltages used with sensors and digital inputs.  So we need to protect the Venus.  We can do this 2 ways.  A relay, where the input is 12DC or 24DC or 110Ac or 220AC and then close a contact, which connects the Venus signal port to ground.  Most of these solid state relays are used to get a 110 or 220V connection triggered by a 5 – 12 or 24VDC input, so I have not tried these.
Otherwise an Optocoupler, one like this 4 channel one from Ebay for  $12.  This is a 24V DC Optocoupler, because Jan-kees runs on 24V DC. 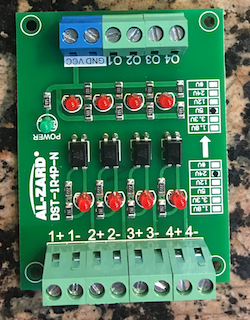 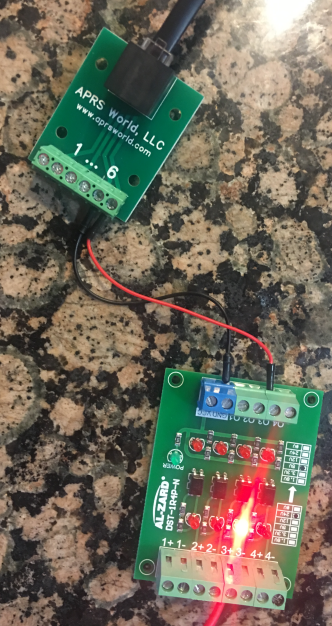 Now one thing which worried me, was the voltage on the output side.  I know the Venus is built on a heavily modified Beagelbone, which is a version or a Raspberry Pi.  These units just like 3V3 DC as signals.  Putting a 5VDC signal on there, even though it says so in the manual of the Venus, it had me worried.  You are talking to person who in 1980 by sheer “mmmm I’ll show you how this works” blew up one of the first optical disk readers costing close to $10,000 by using the wrong input voltage.  The good old laserprinter research at OCE ( Now Canon).  But, since we are switching to GND only the input voltage matters.   As you see the Opticoupler has on the output side GND and VCC, which is 5VDC here.  BUT we ONLY connect the GND.  so when the input gets “high”  the Venus tells me there is an alert.    This optocoupler has a 5VDC output, but the Venus wil also work with the 3V3DC output optocoupler, because we are ONLY using GND.  NO I wil not make the Victron Engineers a compliment, they already know they are brilliant, selecting a very safe way.  (Now you know why line 5 of the RJ12 is GND)

Then via the main screen go to the bilge alarm and go to the setup screen and click invert ( when there is a voltage on the input of the optocoupler, the alert will go on.   Because the normal ‘on’ state for the Venus is connect the signal to ground)

Now when I put 24VDC on my optocoupler input, the Bilge alerts jumps immediately to ALERT and the next screen is the ALERT screen and the buzzer goes off.

Here the bilge alarm is OK

And before I can blink twice the alert screen shows

More to come with the pulse counter

Do these alerts show in VRM…not yet, but they will, by Christmas…:)