So the first thing I checked this morning was emails from Victron, if they knew anything new what to do with the Venus.  At the same time I logged onto the Venus own wifi and saw the Multi visible…..what …I emailed to Victron and asked of they could see it also ….. we are blaming it on ghosts!

Since we were getting guests I had to clean up everything, make the visible part of the boat presentable.  And before the guest were coming we had to get more milk and treats, especially for Timmy and his crew.  At the grocery we found out they were out of  celery salt ( for the cheese) so we bought celery and salt to make our own mixture.

I found out it was only Bep and Jesse ( who after 20 + years living in Holland stil does not speak Dutch, he understands it perfectly, but he keeps replying in English . “everybody speaks English in Holland” is his typical reply).   With some spare time available I started to tackle the sanding of the wheel house, and after sanding applying  ‘ontwerings water” . ( dewatering agent) . to get the water stains out.

Finally got a text from Bep, that they were lost but at the local Praxis, so jumped in the car and brought them to the boat.

A nice afternoon with coffee and coffee and coffee, and Bep & Jesse had to go back home.
While we were having coffee, a nice 40 feet ‘yacht’ came in and I noticed the name “miles Ahead”,  reminding me of the movie Miles Ahead, about Miles Davis, which starred Mike Dennis our waiter from the Pacific Kitchen in Cincinnati.   ( Or as he is known in the restaurant “mike dentist”.  Mike plays the racist downtown cop.   So I had to get their attention, yes they named their boat after Mike Davis, but NO they did not knew about the movie, and would go get it.  So Mike D thank us for making you earn  royalties ! 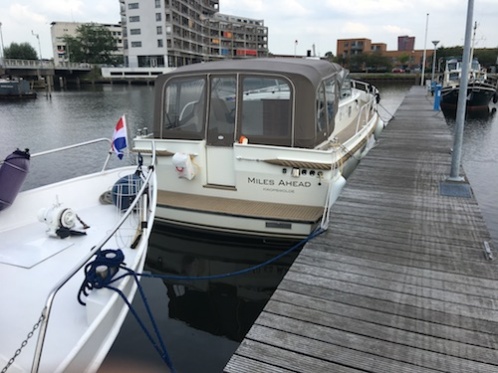 We decided it was time for Pannekoeken,  so we walked to the Wilhelmina sluis ( lock), which just opened and a big sailing scooner with a gaggle of holiday kids motered by.  I stopped in to ask the water height and it was on 2.75 Meters.  TOOOO low for Jan-Kees.

Deb decided a Mexican Pannekoek and I had a Shoarma Pannekoek 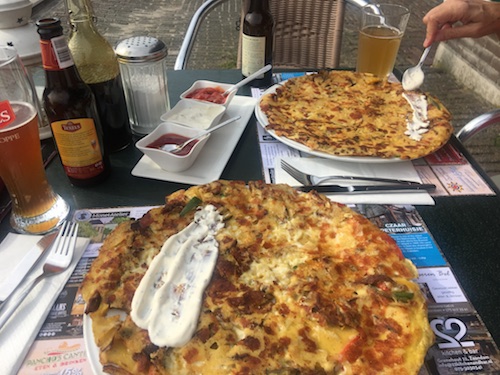 Bottom is the shoarma Pannekoek, right top is the Mexican pannekoek